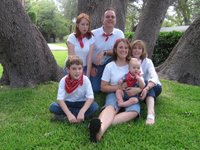 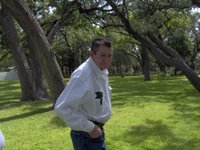 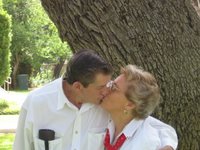 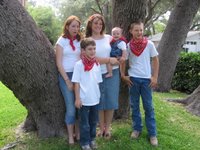 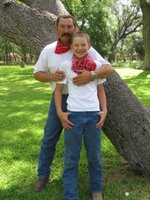 One of the things my mom wanted us to do while home this summer was to take a family picture. Arranging a time for all of us to get together when our photographer could be available was a project in itself. However, it worked out fine. She requested that we all wear jeans and a white shirt. Okay, not a problem, but.....she forgot to mention the "added" charm - a red bandana for all!
We really had a lot of fun dressing up - ironing, well, starching our jeans and then the white shirts - even Walker's onesie got ironed. Tim was the first to agree -wearing it around the collar of his shirt. Sallie did the same. Hunter was skeptical, but eventually wore it like a real cowboy would. Danielle opted for a choker style, while Brittney used it as a headband. Jerry was macho in his application around the neck. Rowdy wanted to wear it as a doo-rag, but his dad eventually won and around his collar it went. And then there was Daddy. He had the last say and absolutely NO bandana would be attached to him in any way. Other than this little glitch in the picture plans, all went well. We had three cameras going at once. The lawn of Vice President John Nance Garner Museum was our background. Afterwards we traveled to a steak house in D'Hanis, Texas. It was wondeful. True Texas size Chicken Fried Steak with all the fixin's was there. We even had our own person playing the guitar and singin' good ole' classic country. We even sang a few lines with him.
The trip back to my dads found an interesting site for Tim -a roadside park that had wireless internet! Go figure! Because it was so late in the day, he was not able to connect.
Guess what else Tim found of interest on the way home? You guessed it- a treasure hunt! (Sshh!) Remember - the secret society of modern day pirates don't like to share the details of the hunt or the treasure! A great day and lots of fun! Did I mention it was 102 while we were taking pictures?
Posted by Dealhound at 10:23 PM