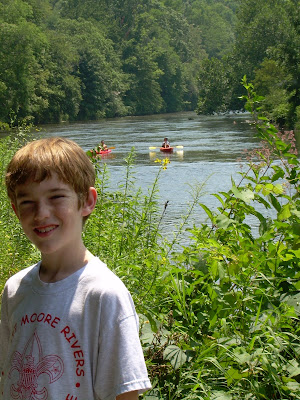 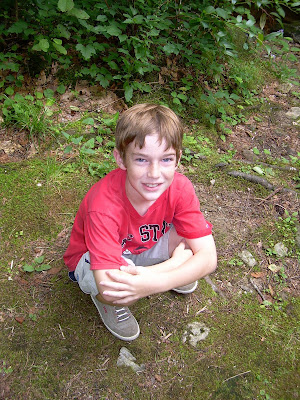 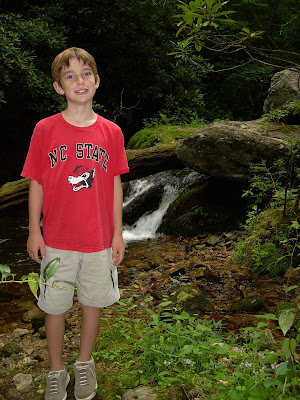 Hunter and I just got back from a two day trip to the North Carolina northern mountains. Hunter had wanted to go and we couldn't have picked a better time. The weather was phenomenal - mid 70's while down in the lowland it was the high 90's!
We started out on Wednesday morning in the truck and headed west. I always like to go different ways when I have time, so we went through all the odd towns. Albermarle, Granite Quarry, Salisbury, Statesville, Taylorsville, Lenoir. And then, the mountain. Hunter wanted to go all the back roads, so of course we went up the mountain on mostly gravel roads. It took a long time, but it really was fun. Twisting and turning, switchbacks to get up the steepest parts. The road followed the creeks, so there were frequent pull offs where you could walk to the creek and hop from rock to rock. We saw only one or two cars the whole way up the mountain. The road and all the bridges were one lane. Along the way, we met the man that grades this road. He was on an old road grader that had no seat. Talk about a nerve racking job! Having to go around all those curves with the grader. One wheel off the edge and down you go!
When we finally got to the top, we came out in the small town of Linville. It was late in the day, but we wanted to try and make it to the Linville Caverns before they closed. We got there just in time for the last tour. Not the most extensive caverns I have ever seen, but interesting. Hunter got to ask a bunch of questions and saw a few bats roosting in the cave. We also got to experience "total darkness" and a real scary story about a couple of 15 year olds that dropped their only lantern in the water when exploring the cave. Said that they finally made it out after two days by following the flow of the water.
Later that night, we got to Boone and went to the show "Horn in the West". It was supposed to last 2 1/2 hours, but we got rained out at the intermission. The show was about Dan'l Boone and the early pioneers that came through the area.
We spent the night in a Boone hotel and next morning, we headed north for a day of backroad driving, geocaching, and exploring small towns and tourist shops. We went through Todd (and it's general store), Trout, Jefferson, and Sparta. We found a couple of caches in the high mountains, one on the New River and one in a park in Jefferson. All beautiful places. On the way home from Sparta, we took a much faster road. Came down through Roaring Gap on 21 to Elkin. Once we got to 421, it was smooth riding all the way home. It was an awakening to get down the mountain where it was hot again. Now we are just waiting to do it again!
Posted by Dealhound at 11:10 PM