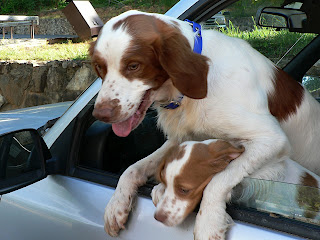 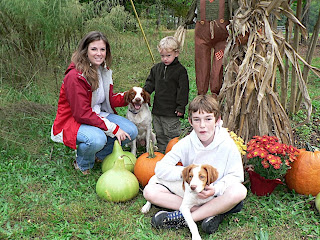 Riley and Pell are great buddies.  We got Riley when Pell was three years old.  Not sure why.  Might have been because our baby was growing up and we were feeling the need for a baby.  Might have been because we felt that Pell was lonely.  Might have been that Joy was feeling the need for a road trip.  Might have been summer boredom!
Whatever the reason, we started our "Riley Experience" with some research online, looking at websites of Brittany Breeders recommended by the breeder we bought Pell from.    These breeders were in Indiana!  We hit a time when there were many puppies available, so we browsed through the list and found a puppy to our liking.  The primary requirements were that the puppy was a male and matched Pell in color scheme (heavily white with dark orange patches).  We found one that fit the bill and called the breeder.  We had found Riley! 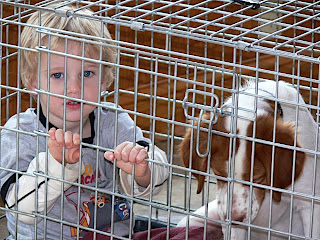 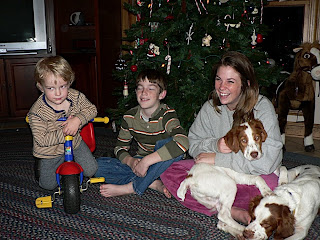 Joy decided that she wanted to travel to Indiana and get Riley on a weekend roadtrip with the boys.  They left one morning and got to Indiana late one night. The breeder put them up in a trailer that she owned.  The next morning, Joy started home with three Brittany pups!  Two of them were not for us, thank heavens, but for two other buyers in North Carolina.  After the long trip home and a van that now smelt like the bottom boards on a dog kennel, she delivered the dogs and made it home.
Well, in the intervening months, Riley has grown, played, chewed and become and integral part of our family.  He and Pell are the best of friends and romp and play most of the day everyday.  Riley is nearly as big as Pell now, and he is settling down just a bit.  You can tell he is treated well.
The most surprising thing that has come out of our acquiring Riley is the obvious friendship that he and Pell have together.  They roughhouse almost all of their waking hours together, finally quitting when they tire out and collapse into sleep.  Indoor or out, they are together, running around and never seeming to tire or become inpatient with one another.  Now that Riley is nearly grown, he looks more like Pell each day.  When you see them across the pasture or in the yard, you cannot easily tell which is which.  If they are close, you can tell by seeing their faces.  We are all the time calling one by the other's name. 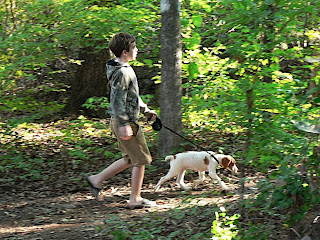 So we have a pair of beautiful dogs.  We have been very fortunate with the chemistry between them.  Come by and see them sometime.