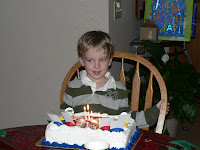 With each child's birthday, the excitement they feel about a party, a celebration, the cake, and presents of course, is immense. The traditions of a birthday are part of what make them so fun. I'm not sure what age you get where the excitement turns to dread, but for the little ones, a birthday is a momentous occassion that signifies they getting bigger, growing older and having more significance in the world.
Walker's day starts with his morning at day care. "Small birthday cakes" as he would call them, (miniature cupcakes) were shared with his friends. A choppy "happy birthday to you" was sung with some unique creations of words in the song by his "friends" at school. Dad picks him up promptly at noon. Thankfully a nap was in his plans because his demeanor was less than optimal for his upcoming party. And then the Bakugan party began. Walker's request was for a Sonic the Hedgehog cake, but that was nowhere to be found in the five stores I searched. So, Wal-Mart came through with the Bakugan theme. What is this you ask? Same question we asked at Christmas when my brother and his family provided Walker with his first red Bakugan toy or thing. Not sure what it is. From the makers of Yu-Gi-O and a similar concept to Pokemon, the round ball of plastic gets rolled. The goal is to roll over a card that has a magnet in it and the round ball becomes a creature of sorts. (there are more rules to the game and collecting points etc, but it seems much to complicated for me) But for now, this is the "in" thing and Walker seems to enjoy them. So, with Bakugan plates, cups, napkins, table cloth, blowers and face masks, the party begins. Hamburgers and Homemade Vegetable soup for the adults (this was Tim, me, Grandmother and Granddaddy and Hunter) and Hot Dogs for Walker were the birthday boys meal. We then enjoyed the birthday cake and "sprinkle" ice cream. And then, the moment he had been waiting for...the birthday presents! yippee! Guess what was in one of the gift bags? You guessed it - a Bakugan! He also added several games to his shelf - SpongeBob bingo, Gold Fish and checkers, a Bop-It game, a memory game, $4 in cash for each year from his Nana in Texas, more $ from the Grandparents and a Nerf gun ( of which Hunter actually enjoyed). Hugs and thank yous, smiles and kisses concluded his special day! His dad measured his height on the laundry room door and my how he has grown.
Four years ago, Brittney was home during her winter break. She was having some friends over - Joey, Jessica and Mosha (if my memory serves me right) - we were having spaghetti. Contractions started while cooking. I had worked that day and home by 5:30pm. I remember walking around and around the island in the kitchen. With this being my 4th, Tim was not wanting to utilize his nursing skills in the area of childbirth, so we were at the hospital by midnightish. From the ED lobby into a wheelchair, then to the triage area of labor and delivery. The admission part done and a few contractions, to the room we go. Dr. Byron was not on-call that night, but Dr. Kantarowski was. Contractions continue, no pain relief in the form of an epidural until plenty of IV fluids had infused. My water was broke by the MD, the contractions become ever so present, the IV fluids continue. Finally, the anaesthiseologist was called. I believe his took his sweet time in getting to our room about 20 minutes after the call and as it turned out, to no avail. A turn on my side for the procedure of the epidural, then the pressure, a flip back to my back, a call to the MD, the nurse saying "do not push yet, the MD is not here" - as if I could control the natural occurrence of things! At around 3:15 that morning, Walker came into the world! Tim was quick to follow him as he was checked out and cleaned up.
Four years later we have a blonde hair, blue-eyed, affectionate, happy boy! He is adored by his three siblings and continues to keep Tim and I feeling young....most days.
Happy Birthday Walker!
Posted by Dealhound at 8:59 PM